The Science in a Cup of Green Tea 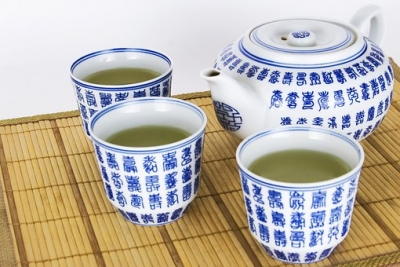 Steeped in testimonials from health advocates, green tea is served up with quite the halo. Thousands of years before it became a darling in the Western Hemisphere, China and Japan touted its medicinal purposes. Whether or not these claims hold up to 21st century scientific rigor is being tested.

Green tea is being scrutinized to see if it can help prevent chronic diseases including heart disease, cancer, and metabolic syndrome.

Green, black, and oolong teas are all harvested from the same plant, Camellia sinensis. The colors and qualities change with how they are prepared. The difference is that green tea is steamed without being oxidized as is done with oolong and black teas.

Many billions on the planet enjoy tea as a beverage. But it is also sold in liquid extracts, capsules, tablets and in topical skin products. Regular tea has substantial amounts of caffeine but decaffeinated versions are also available.

For all its plaudits, clear evidence is somewhat limited for most health links.  Let’s take a look at the available research.

Green tea is rich in powerful antioxidants called catechins that may prevent cancer. Because it doesn’t undergo fermentation, green tea contains greater amounts than in black or oolong varieties. There are four main types of catechins in green tea but epigallocatechin-3-gallate (EGCG) dominates, making up 40% of the total. Much is known about how EGCG works it magic. In vitro studies with human cancer cells as well as in vivo studies with animal models have investigated the mechanism of EGCG for its anti-cancer properties.

Several studies showed positive results in specific cancers in humans. In one report, 600 mg of daily catechin extract had a significant protective effect in patients with high-grade prostate cancer. And in patients with human papilloma virus-infected cervical lesions, EGCG (200 mg/d for 12 weeks) was effective.

Green tea alone may have beneficial effects but clinical and epidemiological studies yield conflicting results. It is thought that variables in the tea prep, such as quantity of leaves, brew time and temperature change the polyphenol content.

In a 2015 meta-analysis of eighteen prospective cohort studies, green tea showed benefit. An increase in one cup of green tea per day was correlated with 5 % lower risk of cardiovascular disease (CVD) mortality and with 4 % lower risk of all-cause mortality. The paper appeared in the British Journal of Nutrition. An epidemiological study from 2016 also suggested that greater tea consumption is related to lower CVD risk.

Last year, a collaborative study between labs in China and the United States looked specifically at tea consumption and changes in high-density cholesterol levels. Tea Consumption and Longitudinal Change in High-Density Lipoprotein Cholesterol Concentration in Chinese Adults appeared in the Journal of the American Heart Association. The researchers looked at more than 80,000 subjects who did not have CVD at the onset of the study in 2006. By the 6 year follow-up, tea consumption was inversely associated with a decreased rate of HDL-C concentrations. Those decreases were less pronounced in men as well as people over 60 years of age and those with metabolic syndrome.

The very act of settling in with a cup of tea is calming. Indeed, a meta-analysis of randomized controlled trials showed that imbibing green tea for even 3–6 months may produce significant reductions in systolic and diastolic blood pressures.

Also, stroke risk—directly related to hypertension– may be reduced with green tea intake. One to three or more cups of green or black tea per day is associated with a 20% to 30% risk reduction in stroke.

How green tea loves our hearts

Rich in polyphenols and catechins, green tea protects the heart in many ways: antioxidation of proteins, DNAs, and lipids; antiproliferation of vascular smooth muscle cell; anti‐inflammation in cardiovascular cells; and improvement in endothelial functions, blood pressure, and lipid profile.

A 2017 meta-analysis of six studies found no impact of green tea or green tea extract on diabetes biomarkers (HbA1C, HOMA-IR, fasting insulin, or fasting glucose) in people with pre-diabetes or Type 2 diabetes.

Finding a magic bullet for weight loss has always been elusive. Here too, green tea or its extracts have disappointed, not showing an impact on weight of overweight adults according to a recent meta-analysis.

An ointment containing green tea polyphenols has proved effective against genital warts as well in preliminary trials with plantar warts.

The world can be toxic: pesticides, smoke, polychlorinated biphenyls (PCBs), and arsenic are some of the most common poisons. These toxins can harm us on many levels including molecular, cellular, tissue, organ, and systemic levels. Our bodies can mount impressive defenses but help is always welcomed.

Green tea catechins protect against these environmental toxins and toxicants in preclinical studies and to a limited extent, in clinical trials. An excellent review appears in the Journal of Nutritional Biochemistry in February 2017.

How does this work? Green tea polyphenols trap metabolites, the toxic reactive cellular types—thereby reducing their toxicity. These transformed metabolites of EGCG were detected in humans after drinking four cups of green tea per day.

And as explained in a recent article from the International Probiotic Association, gut microbiota ease creation of these new aminated metabolites. A recent study in Free Radical Biology & Medicine described the complex mechanism.

Rest assured that drinking green tea in moderate amounts is safe. However liver problems have been reported with concentrated green tea extracts. But a recent review of the many trials concluded any liver-related adverse effects were rare. Even so, be mindful of quantities and dosage.

Experts suggest that the extracts be taken with food and be stopped immediately if there are any signs of liver, such as abdominal pain, dark urine, or jaundice.

Matcha is green tea leaves that have been specially grown then processed into a fine powder. Because the entire leaf is used (versus a steeped version), matcha packs a punch with polyphenols.

Matcha can be drunk plain, mixed into water or milk. Many choose to add to smoothies, yogurt or even lattes. The brilliant emerald color is quite a hit on social media.

Clare Fleishman MS RD bridges the gap between science and health across most platforms: major newspapers, magazines, books (Globesity), workshops, social media and websites. From corporate whiteboards to refugee schools in Egypt, Fleishman agitates for personal and public change. In 2010, she launched www.ProbioticsNow.com to share the cascade of new discovery in the microbiome. Always amazed at this “forgotten organ” Fleishman also creates white papers, blogs, videos and social media for the International Probiotics Association.

This Is A Custom Widget

This Sliding Bar can be switched on or off in theme options, and can take any widget you throw at it or even fill it with your custom HTML Code. Its perfect for grabbing the attention of your viewers. Choose between 1, 2, 3 or 4 columns, set the background color, widget divider color, activate transparency, a top border or fully disable it on desktop and mobile.

This Is A Custom Widget

This Sliding Bar can be switched on or off in theme options, and can take any widget you throw at it or even fill it with your custom HTML Code. Its perfect for grabbing the attention of your viewers. Choose between 1, 2, 3 or 4 columns, set the background color, widget divider color, activate transparency, a top border or fully disable it on desktop and mobile.